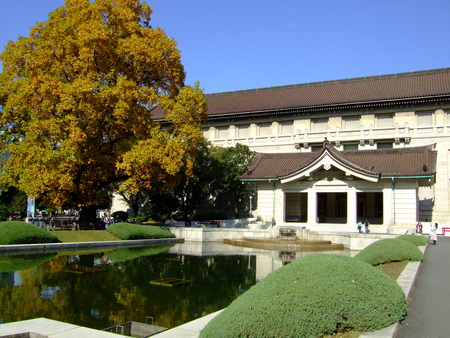 So today we decided to head up to Ueno and check out Ameyoko and the Tokyo National Museum. Ameyoko (short for Ameya Yoko-cho) was a big black market place in the post-war days that these days has turned into a sort of large bargain shop area palooza thingy. Ok, I've had a can of happoshu and a glass of sake, I admit it.

So yeah, some extremely small cramped streets filled with tiny stalls selling discount stuff, tons of restaurants, fish sellers, fruit stands, all kinds of great stuff. By the way, you know how fish stands are generally considered to smell rather unpleasant? Yeah, not these. The piles of fish actually somehow smelled deliciously fishy instead of horribly fishy. I have no idea why... maybe how fresh they were? Probably. Anyway, I just thought that was interesting,

Anyway, we wandered around Ameyoko until about noon, at which point we nommed a crepe and a chocolate coronet from a stand then headed for the museum. Unfortunately, it's hard to say too much about the museum. I mean, it was awesome, one of the best museums I've ever been in, but you know, what kind of blog post do you write about a museum? I will mention that they had a bunch of mind-blowingly old stuff, from the Jomon period in Japan (you know that dogu with the missing foot you see in pictures? yep, that's there) as well as some ancient Mesopotamian and Egyptian stuff in one of the side buildings. It was all pretty nifty. Plus the admission was only 600 yen. They could easily charge twice that and it would be well worth it.

After that we went back to Ameyoko and had dinner a really great ramen place. Then we shopped around a little bit and finally came back to the hotel with the intention of heading out again. A combination of severe foot pain and the fact that the place we were going to go was closed sort of put the kibosh on that though. So that was about it for today. We had a really great time, but not one that translates easily to blogging.

Now I will go pass out and hope I grow new feet and legs by morning.