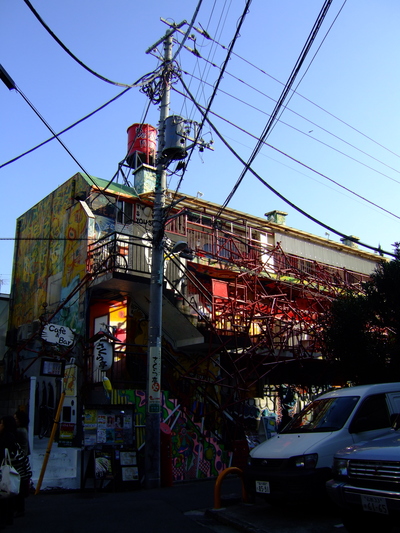 So today turned out to be shopping day. The plan was check out Meiji Jingu shrine in the morning, then go back to Harajuku and scope out some more of Cat Street, then maybe up to the giant department stores in Ikebukuro. What actually happened was we walked down to Meiji Jingu, said to ourselves, "Oh, it's a really big shine. Hey some priests. Cool. Hey lets head to Harajuku." We might have to consult some guidebooks and see what's actually supposed to be super cool about the shrine, cause while it was kinda cool and all, there didn't seem to be all much to see (the gardens maybe?).

So we spent from probably 10:30 or 11 until about 3 shopping in Harajuku. Now, Lynnea directly requested that I not get her a birthday present, but rather that I buy her clothes in Tokyo, and today was a pretty good start. We mostly shopped on Takashita Street, though we did get Lynnea some earrings on Harajuku Street and a really cool jacket over on Cat Street. She nabbed some really good stuff too. After that we had lunch at a place called Zip Zap that really pretty good, though I suspect a bolognese croissant sandwich is not something you're likely to find outside Japan.

After that we wandered into the Ometesando Hills shopping mall (actually just to use the restrooms), where they had, and I am not kidding, a Christmas display so blindingly beautiful it almost brought tears to my eyes. We took some pictures, that I will perhaps post later, but I doubt they will do it justice.

Anyway, then we headed on up to Ikebukuro to check the Seibu department store. Which was amazing. Think of the largest shopping mall you have ever been in, compress it all into one floor, then make there be 14 of those floors. I'm probably exaggerating, but only slightly. (And apparently there's a competing store on the other side of the station, which is similar in scale). Most of the place is high-end though, so we really only shopped on the top few floors which are a store called Loft, that's actually quite a bit more reasonable than the places downstairs. (I finally found the pens I was looking for, some Tachikawa School Gs).

After we came back from there we wandered over to the Yamashimaya Times Square, which is pretty much more or less across the street and up a couple staircases from our hotel. We wandered around the big Tokyu Hands there, and over into Kinokunya bookstore. Then we went to a donburi place in Shinjuku Station for dinner which was pretty darn good. The great part though was the table full of old businessmen next to us who were drinking beer and generally trying to wind down from the work day. We didn't talk to them or anything, but they were kind of fun.

Then for some reason we wandered around Shinjuku for a little bit before finally coming back here. Which is where we are now, believe it or not. Ok, that tears it, I must be getting sleepy. I wonder if there's anywhere in this town a guy can buy a new set of feet...