Listening to: nothing
Current mood: cheerful 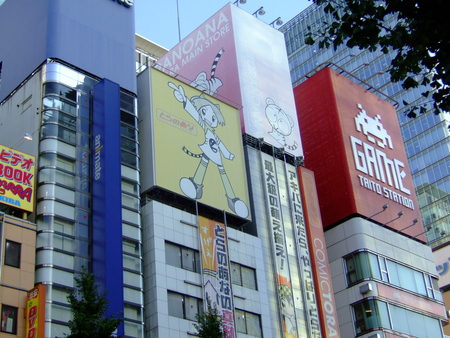 So today was the day to go check out Akihabara. Now, I may be wrong but if you don't know what Akihabara is, you're no kind of nerd. Even if you're not an anime, manga, or electronics nerd, it still seems like you'd have at least heard the name and gotten the gist. As I assume all my readers are nerds, I need not expound. Oh fine, wikipedia link.

So we hopped on the Yamanote and headed over to Akiba first thing this morning. It was still a little early so we wandered around a bit and checked out one of the several large arcades before happening upon the rather cool (but um, slightly smelly... alright, I'm actually gonna go with rather smelly, but you know nerds, especially the feral variety...) vintage game shop Super Potato, which had been on my list of places to check out. Despite the aforementioned odor, Super Potato was pretty cool. It's on the floors 3-5 of a grungy little building, floors 3 and 4 of which are solid vintage games and game machines, and floor five being a small vintage arcade. They had games for pretty much every system up to the Playstation, maybe a little newer but not much. MSX, Famicom Disk System, all sorts of stuff.

After that we went to one of the giant electronics stores... Ishimaru, I think it was. Walked around there for awhile, got really hungry and went to go find food. Now, we keep getting hungry exactly at noon, which perhaps not the best time in Tokyo, because absolutely every single place is slammed. We ended up grabbing a bite at MOS Burger and following it up with a couple Mister Donuts. Not too shabby really.

After that we wandered a bit and went to a couple shops, one of which was across from the arcade we were at earlier. So Lynnea talked me into going back into the arcade to try my hand at a couple of the UFO Catchers. I ended winning a small plush Nyanko-sensei (shown below) from Natsume's Book of Friends, a show/manga that I happen to love, which was pretty cool. I had just sort of figured I was giving the arcade a free 400 yen.

So now that we were warmed up we wandered into another store, Jeans Mate, which was pretty awesome. It's 5 stories, floors 1 & 2 being mainly characters goods, floor 3 being Akihabara souvenirs, 4 & 5 being mainly pretty cool clothes. I think we might have to go back. While we were there though, I grabbed the Bakemonogatari puchi nendoroid set 2 for a measly 1480 yen. If you don't know what that means, um, it's better if you just forget I said it.

So the next place we went was this massive 8 story building of pure burning otaku might. And believe it or not, I was on floor 8 (though we skipped the two doujinshi floors) before I realized, oh, hey, I'm in Mandarake. (To be fair, I didn't know there was one in Akiba... I only knew about the original one in Nanako).That place was awesome and crusty. It's for the hardcore otaku though... the prices there were relatively insane, but if you wanted it, they probably had it.

So we did a little more assorted meandering, then finished up the day with the main Akiba Sofmap. I was mainly uninterested until we hit the 8th floor, which was the game and figure floor, where they actually had some pretty darn good prices. To Lynnea's mounting horror, I nabbed the Bakemonogatari puchi nendoroid set 3, as well as a Lucky Star puchi nendoroid set where they're all dressed as Street Fighter characters (cause, heh, weird). Now I just have to find set 1 and I will have all the Bakemonogatari puchi nendoroids. Bad Decision Dinosaur whispers into my ear: Yessssssss. (Unfortunately I haven't seen that one anywhere). Also again, if you don't know what I'm talking about, please pretend I never said it.

Anyway, that was most of the day. We also went to the 45th floor of the Tokyo Metropolitan Government building to check out the view, which was pretty stunning (we didn't get any pictures tonight though, but we figured we'd go back, it's less than half a mile from our hotel). Then we ate some remarkably good katsu curry, and that's about it.

Now just to kick back with a bit of sake* and wind down. 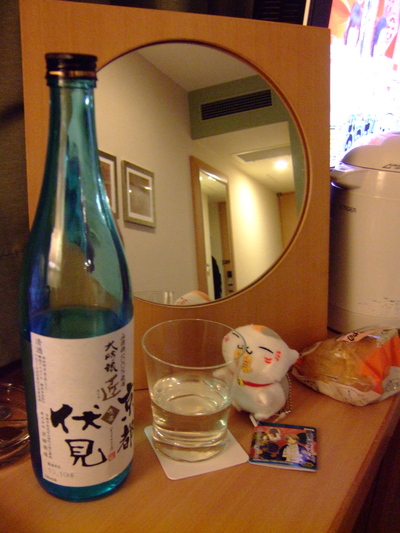 (*Side note: I learned recently that these days Japanese don't drink sake. Really almost ever. They mainly just make it and sell it to us. Bizarre, isn't it?)


Cutest photo ever! and, my horror mounts more with everyday but also my delight.