Listening to: none
Current mood: sleepy 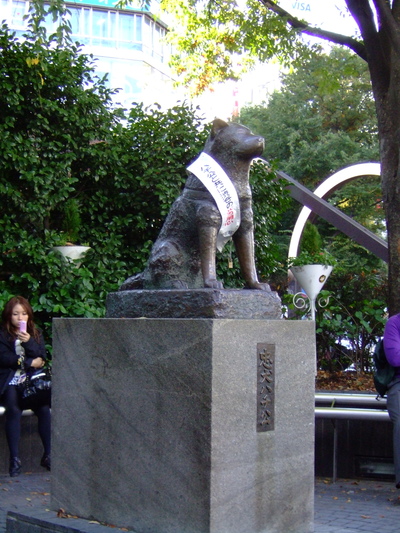 So yeah, I guess these days I never blog unless I'm on vacation or making beer. Well, this time it's vacation. So yeah, we're in Tokyo. We got in last night and eventually found our way to our hotel in Shinjuku, which is just about two blocks from the station. By the time we made it to the room it was all we could do to grab a ham sammich from the convenience store across the street, eat it, and fall asleep.

So today was the first real day here. First impression of Tokyo: dude. Maybe after a few more days I'll be able to describe this place. Probably not. It's utterly unlike anything I've ever seen. I mean, I thought I had seen a lot of stuff, but I think I saw more today than I had up until yesterday inclusive. This place is amazing. It's practically a fractal, everywhere you look there's just more and more stuff the more you look at it. This may not make sense, but I'm still a bit jet lagged and honestly only about half awake right now.

Anyway, I sort of figure that after a very long flight the next day is pretty much a write-off so we didn't have too much planned for today. After a short walk around Shinjuku to get our bearings, we decided we'd take a stroll down through Yoyogi Park and check out a little of Harajuku. Once we got down there though, we were still feeling a bit too shy to go in anyplace, so we kept on walking and ended up in Shibuya.

So, yeah, Shibuya. Again... dude. I don't even know what else to say. It's just... I can't even come up with a description, I'm too tired. Anyway we wandered around Shibuya for a little while, ate some really good curry and cheese filled taiyaki, and finally took a tour through the 109 Building. If you don't know the 109 Building... basically if Shibuya is the center of fashion for Japan (not to mention its influence on the rest of the world) the 109 Building is more or less the center of Shibuya. It's 9 floors crammed full of tiny, expensive, ultra hip boutiques with improbable names (I was rather amused by "Titty") and tiny, expensive, ultra hip girls walking around in painful looking heels covered in fur (seemingly the current trend). It was pretty crazy, but pretty damn cool.

Anyway after that we hiked back up to Harajuku, and shopped around a bit at Kiddy Land and a few of the shops on Cat Street (didn't buy anything this time, but we'll be going back), ate some takoyaki, and walked back to the hotel. Then we decided to stock up on a few supplies, and I had heard the place to go was Don Quixote (over at the edge of Kabuki-cho). Holy Lord. Like... take the contents of an entire shopping mall and cram it all into 5 stories of one small building, then mark down the prices on everything. If you ever need some booze, a tennis racket, a frying pan, a two thousand dollar handbag, a inflatable anime love doll, and some snacks, I know the place to go. (That wasn't our shopping list by the way.)

So by the time we got back with our chips and sake and shochu and cetera we exhausted and dying of hunger. Luckily there's a ramen-ya pretty much next to hotel, and it turns out their ramen is pretty damn good. So that's been about the day. Tomorrow we're planning on hitting Akihabara, at which I will most likely say dude again.

(As an aside, there was supposed to be a picture to go with this post but something is being weird with my ftp server and it won't let me log on. I'll up it when a chance.)


Agreed and double agreed! A crazy place is Tokyo.