Well, last day in Brussels until we come back in a couple weeks to fly back home. And much to my dismay, we still didn't manange to get to any of the museums (We'll have to skip the day trip to Bruges and catch the muesums when we get back). But that's ok, we went somewhere better - Brasserie Cantillon! Hey, it's us in the Cantillon tasting room! 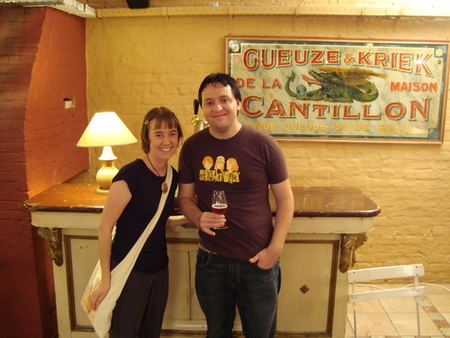 Now, it just so happens that my favorite beer pretty much ever is Cantillon Gueze. (It's sold as Cantillon Classic Gueze in the states, and it goes by Gueze 100% Lambic Bier over here). It's sour and funky and completely amazing. I often liken it to drinking a glass of cheese. The only possible problem with it is that it goes for about $16 a bottle back home.

So you can imagine that getting to actually go there was pretty darn exciting. Basically what you do is you pay 5 euro to get in and you're given a tour book and you give yourself a tour through the brewery, then you get a glass of the gueze and a glass of the kriek at the end. Sort of low impact, but it was really cool just to see everything. And let me also add that it smells fantastic in there. 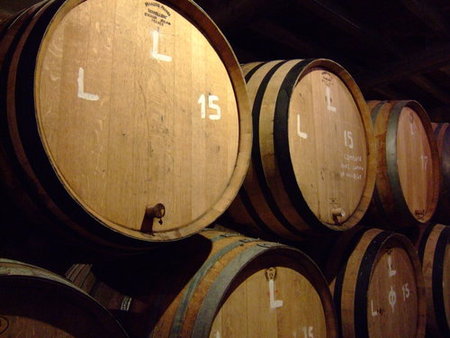 The other perk was that if you want to take some beer home with you (or back to the hotel as the case may be), it's vastly, vastly cheaper than getting it back home. We opted for the case containing a 75cl bottle each of the gueze, the kriek, and the framboise which was about 14 euro. If you just wanted the gueze it was 11 euro for three. Fantastic.

Anyway, that's it for Brussels for now. Tomorrow it's on to London.


Okay, when y'all get back I'm going to ask for your itinerary. Where to stay in Brussels, etc.

Damn. I need to stop being lame and do some traveling.


Also, the people at Cantillon are fantastic and so so enthusiastic about their beer. They seem to think of it almost as a health tonic. My favorite part of the tour was overhearing the tour guide for a bunch of drunk British fellows. She mentioned in passing the Children's Beer and when those boys reacted with disbelief she assured them that it was just fine for children. Honestly, it probably doesn't hurt them at all.