Listening to: nothing
Current mood: train-ridey

Aaaaa! Why the heck did people tell us that London wasn't any good?! London's quite possibly the best city I've ever been to in my life. I could totally live there, it's pure fantasticness. Instead everybody was just like, eh, London, don't know why you'd bother going there. So we only got a day and half there when really a week wouldn't have been enough. Hey, a tourist picture! 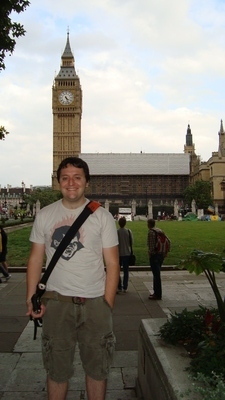 Still, even with only a day and a half we managed to squeeze in quite a bit. Saw Big Ben and the Houses of Parliment and Westminster (just the outsides, you understand), Trafalgar Square, a bit of the National Portrait Gallery, Hyde Park, a tiny fraction of the Victoria and Albert Museum, and the British Library's treasure room (First Folio! Magna Carta! Codex Sinaticus!). Plus we had a pretty good curry, and quite a bit of pub food, and several pints of cask ale. Not too bad for a day and a half. We've decided that we're going back for at least week someday, someday sooner rather than later I hope. The only two drawbacks were our horrible hotel (avoid the London House Hotel, unless you want to sleep in a small closet in a basement with a bunch of builders outside shouting at 7am) and the lack of easy to find free wifi. Which is why I'm posting this now.

Anyway, Lynnea's looking at me like "when is he going to let me use the laptop", so more later.


London really is fantastic. I can't wait to go back.