Listening to: nothing
Current mood: cheerful

So, day 2. Actual awake day in Brussels. Seeing as we slept 13 hours, we didn't get a start on the day until a bit after 1pm this afternoon. As a result we didn't actually get as much packed in to the day as I'd hoped. In fact, we didn't really do anything of substance.

We mainly just wandered around down by the Grand Place, and by the time we got to any of the museums they closed. C'est la vie. We did go see the Mannekin Pis (see Lynnea's Blog for details), eat some frites and a waffle, and take a bunch of pictures. Hey, here's me in the Grand Place. 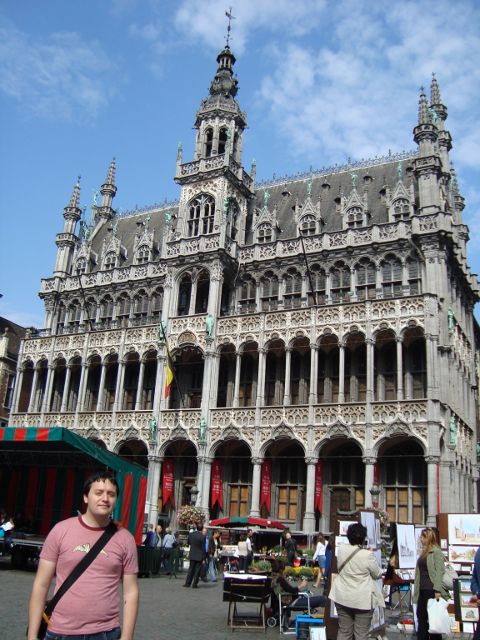 Oh, and we also went and saw the Notre Dame d'Chapelle, a 450 year old chapel which was very cool and full odd statues and carvings and the like. No wonder M.R. James was always having old Catholic stuff be creepy, it can be somewhat creepy. Absolutely beautiful though.

Anyway, after all that walking around and such, we had some dinner at a little pub type place that consisted of... hmm, I think mine was called Carbonnade a la ... something. Stewed beef in gravy with frites. Mmm. (All Belgians eat is frites, by the way). Lynnea had Chicons au Gratin which was essentially a bowl of cheese and mashed potatoes with ham-wrapped chicory in it. Hers was better than mine, but not by much.

And now we're back at the hotel and it's now. And we've got to go down to the hotel lobby so I can post it. More tomorrow.


The Chicons au Gratin were one of the best things I've ever eaten. Very very good. Probably the reason I gained 3 pounds by the end of this trip. I seriously doubt the daily full english breakfasts and the multiple helpings of frites slathered with Mayo made any contribution to the weight gain ;)