It's always fun to start the day by realizing that you forgot to take you contacts out the night before. It happens to me oh, say, once or twice a year, and it usually goes like this: "Uhhhnnn. Musst wake up. Must waake uup. Ok. Ok. Waking up. Opening eyes. Hmm, I can see really well. Damn it." (I am vaguely undeadesque most mornings). Which means that for the first four or five hours I was up today I had my contacts soaking and was pretty much blind. I did dig out my ten year old glasses, but believe it or not my vision seems to have deteriorated in that time, though actually my old glasses don't look too bad on me.

That said, it's been a pretty good day so far. The highlight being that Lynnea came home from school and had a present for me. See, I've been looking for a little batty pin to wear on my jacket for a few weeks now but it seems that Halloween swag is not as prevalent this year as it is some other years. Anyway she found one at her school bookstore that is black and glossy with orange rhinestones for eyes and a few little regular rhinestones on each of the wings and bought it for me. Which was delightful. And then I got to go out to lunch with her which was also fun. So yeah, it's been a pretty nice, low key day. I'm also on my fourth or fifth cup of coffee which makes things more fun. Thing is, I need it today since not only am I tired, but it's ridiculously cold outside. People are pointing out incessantly that it was 80 degrees on saturday and snowing in the mountains last night. Which is admittedly a little strange, but whatever.

Speaking of Strange, I feel compelled to share the following image, from Dr. Strange v1 #19: 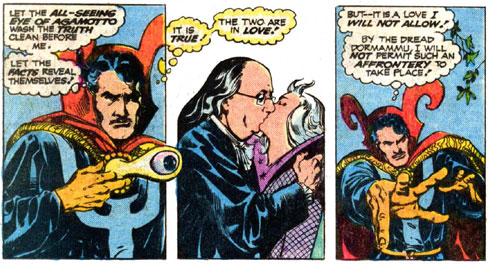 No you're not mistaken, that is most certainly Ben Franklin. If there's one thing this comic has taught me it's that the real reason that you shouldn't travel back in time (especially for absolutely no reason, as happened in this case) is not that you'll change history, or mess up the space-time continuum or anything like that. It's that if you do, Ben Franklin will get it on with your girlfriend. I'm not kidding. There's actually two full pages in issue #18 where it shows Ben Franklin gradually seducing Clea and eventually "laying her down by the fire", as it were. It's probably a little too big to post, and I'm feeling lazy at the moment, but rest assured it's rather disturbing. Of course this was all supposedly an illusion conjured up to make the Doc unsure of himself, but the thing is the Doc was at the bottom of the ocean fighting this wizard/sea monster guy (who was later revealed to have been in disguise as Franklin, but then wasn't again... actually the whole thing didn't make too much sense) at the time, so he didn't see any of it. And I don't think I have to point out that the whole purpose of the Eye of Agamatto is that it always shows the truth. The Doc decided he was imagining things later and Clea played dumb (of course she did!), but it seems pretty obvious. The Eye of Agamotto don't lie. But really, that's nothing compared what I hear Ben Franklin does in next month's Spider-Man...