Well, it was my pleasure tonight to experience two of the most awkward hours of recent (and possibly otherwise) memory. Imagine if you will that your closest friend, whom you have been friends with since the second grade, comes to town with his child bride - er I mean fiance, and you go out to dinner with them and basically not once during the whole time do they talk. Yeah, that was pretty much it. Lynnea and I went out to dinner tonight with my friend Nick and his (um, rather young) finace Charolette. Now, Lynnea and I aren't the most outgoing pair, but we can usually manage to hold up our end of a conversation. But good lord, this was bizarre. Like, we couldn't get more than a one or two word sentence out of them for anything. It was like pulling teeth out of a herd of cats to use some muddily mixed colloquilaisms. At one point - and I think this example really sums up the entire experience - Lynnea says to Charolette, "So are you from Roseburg originally? Like, did you grow up around there?" and Charolette says, I swear, she just says in a slightly clipped tone "No." and goes back to eating her yakisoba (which she claimed she couldn't pronounce but I could do a whole other post on that...) That's it, just "No". Not "No, I'm from blah blah blah..." or anything. And they were like this for two hours. I'm mostly rid of my social anxiety disorder nowadays but that was just incredibly uncomfortable. I can't really figure out what it was either. Did Charolette take some sort of instant dislike to us? She didn't seem to. Was she intimidated by the fact that I've been friends with Nick longer than she's been alive? Why didn't Nick talk either? All I know is that that was one weird dinner. But since it was at my favorite resturant at least it was tasty.

Anyway, after we got home we watched the last two episodes of Azumanga Daioh (I've finally gotten Lynnea to start watching anime with me - w00t!) and I called Pat and talked him for like 2 hours or something. Which was enjoyable since I had forgotten to call him for the past um, few months. Then I watched a fairly frightening MST3k episode starring Kathy Ireland and here I am. But yeah, still freaked out about the dinner experience. Anyway I think I've got some reading to do.

Listening to: nothing
Current mood: not uncheerful

I have returned. To blogging that is, I've just been sitting here the whole time. Not that I actually stopped blogging I just keep forgetting to post lately and... Annnyway. But the main reason I'm back to blogging is that massive reforms are currently shaking the um, me. Or to put it less dramatically and more cogently, I've put together a weekly todo checklist for the purposes of preventing my brain from turning into an inert squishy goo. And since writing a minimum of thrice a week is on the list (and since I'm not often too inspired of late) I should be hittin the ol' blog a bit more often.

But really I needed the artificial kick, my brain has been more than just a little squishy lately. The fact that We has been on my sidebar for the past um, damn a little more than a month now, has not been due to any negligence with updating the graphic. Until today I hadn't picked the thing up in weeks. Which I really don't know how I managed that cause it's a really enjoyable piece of dystopian science fiction. Russian dystopian science fiction from the early 20s even, which makes it all that much cooler. But yeah, it's just been comic books and super nintendo for me lately, and though those be some of the most fine and wholesome pieces of entertainment available, they do not challenge my head very much.

Anyway, that's really the only reason I'm blogging at the moment: to say that I should be blogging a bit more, assuming the schedule holds. Which it should I think, it's much less demanding than the last one (writing something everyday? how I kept that up for a couple months I cannot fathom). On a side note, today marks 5 years since Lynnea and I started dating... let's all say it together now "Awwwwwww!"

Listening to: nothing
Current mood: bemused 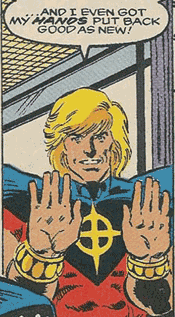 "...except now they're gigantic and freakishly proportioned. See? Um, well, actually there were these giant space bees, right?"

But I kid guest penciller Dave Hoover (joke... too... easy) and guest inker Fred Fredricks (Wait a sec... Fred Fredricks? That's not a real name!). So, for those that don't know, which is probably everybody who reads this blog except Tim, the guy in the picture is Quasar... sort of an oddly-drawn He-Manesque Quasar with giant freakish bee-stung man-hands, but Quasar anyway (though you do get a few points if you thought he was Captain Marvel).

Now, what nobody seems to realize (even Dave Campbell, whose site I love, was bagging on him today) is that Quasar was great. I've been rereading it for the past few days and it's just loads of fun. I mean, he gets alot of flak from alot of comics fans out there but I really defy anyone to show me a more cheer-inducing (serious) superhero comic than Quasar. Reading it just makes you happy. Sure, Quasar is a bit of dope, but really that's what makes him so loveable. He's kinda like Spidey, before all the bad things happened. It makes you wish the 90s never existed. Although, the more I think about it, I don't necessarily need Quasar to make me wish the 90s never happened. I honestly can't think of much from the 90s that was worthwhile. (Grunge? Yeah, I dug it at the time, but I could have done without it.)

Anyway, the point is that Quasar rules and if you don't think so then you can just shut up and go polish your Rob Leifeld... um... posters. Cause... like... posters need polish. Um. Or rather they don't, but you polish yours cause you... you, um... like Rob Leifeld.

Now that's what I calls a burn. Boo-ya.

(I hereby apologize for the use of the term "boo-ya" on this, my otherwise respectable site.)

Listening to: nothing
Current mood: ennui

So, I think the weather up here has finally pushed me all the way to depressed. I don't know how things are in the rest of the world but here in Ashland it's it's dismally cold and rainy. Which was all find and good 2 or 3 months ago but it's bloody June for crying out loud. I wants me some summer already.

But yeah, I haven't really felt like doing anything at all the last few days. I spent most of sunday playing old Castlevania games (which, by the way, I don't think that the first Castlevania game on the NES was actually meant to played by humans... robot monkeys maybe, but not humans) and I think that's the most constructive thing I've done since. Well, until now that is, but honestly I'm not blogging cause I felt like it, more just for something to do.

And yeah, I don't know what else could be bringing me down other than this horrible suffocating weather. And actually complaining about the weather makes it worse since that makes me feel old and boring on top of everything else. "Aaaaaah, consarnit! The weather ain't like it were back when I was young! Back in them days we kept our winters cold and our summers hot, dagnabit!"

Well, yeah so I can't think of anything else to talk about at the moment. Depressed and all that, you know. Ah well, I think it's supposed to clear up by the end of the week. Consarnit.