Listening to: The Black Mages II - The Skies Above
Current mood: cheerful

&sub1 - This was a bit of a mix up... apparently there's such a thing as black roasted barley that's 500srm, which my recipe called for, as well as the standard black patent which is also 500srm, but is malted. Not realizing this, I got black patent (all the while thinking a stout without roasted barley was odd). So this may, in fact, qualify as a porter rather than a stout. Though at that level of roast, I don't know how major the difference in flavor will be.

Two beers in two weeks. Craziness, no? But it's actually in the 60s in our apartment, and I've got to take advantage. My usual fermentation temperature of 75-80 is less than ideal. If the weather keeps cool I might even brew again in early March... we'll see. It'd be nice to have a good stockpile of beer through the warmer months.

So, I said that the last beer I did was perhaps the easiest brew session I've had. This one was easier. In fact I pretty much just spent the day the listening to The Magnetic Fields (since it was Valentine's Day, they seemed apropos) and reading a manga I was in the middle of and just got up here and there to tend to whatever the beer needed and didn't really notice the whole brewing process. And as brewing tradition dictates that one should drink while brewing, once I had a can of Old Chub, I really didn't notice what was going on. And this time I landed absolutely dead on where my gravity was supposed to be. I love it when that happens. Tasty wort too... I have a good feeling about this one.

As far as the Dojibiron Red, I'm not so convinced that it's going to turn out that great. What I didn't consider was that when I diluted from a 3 gallon batch to a 4 gallon batch was that it was hopped for 3 gallons. So when I tasted yesterday when I racked it into the secondary fermentor it was really rather bland. Or rather, it had a nice bit of malty/roasty flavor, but almost no bitterness. I'm hoping that once it drys out a little more (it was still at 1.020 as of yesterday) and then carbonates, what little bitterness there is will come out a bit more. Otherwise, I guess I can always just tell people it's a mild or something.
Matt on 02.15.09 @ 02:02 PM PST [link]  [No Comments]
Wednesday, February 11th

Cripe, I meant to blog this beer last saturday when I did it. Oh well, better late than never.

So, at least as far as non-Belgian non-sour ales go, I think Irish Reds are Lynnea's favorite, and yet I'd never made one (I really ought to work on a Belgian or two one of these days...). So, I um, did. I tried to talk myself out of it, insisting to myself that brewing is a huge pain in arse (I can say arse, it's an Irish ale after all) but in the end I was out and about on a friday for reasons unrelated and lazing out to point of not going and buying supplies from the Home Brew Mart seemed ridiculous. Plus it's actually cold in San Diego these days which means I can actually brew something and it'll ferment at reasonable temperatures for once.

As far as the brew session itself goes, this was basically far too easy. It was probably one of the most hassle-free brew sessions I can remember. Which is not to say it wasn't exhausting, but brewing is always exhausting (I can't believe some people brew for "fun"... I just do it cause I'm cheap and I like beer). The only thing that went wrong was that I once again completely overshot my gravity. I ended up at 1.070 when I was supposed to be around 1.050. I don't really like diluting (for sanitation reasons) but when you're that far over, it about all you can do. I'm not sure why I keep ending up so high, I must just be way overcorrecting for my slightly low mash efficiency. Or I may have overboiled as well. I did three small pots in addition to the big one. Speaking of which: 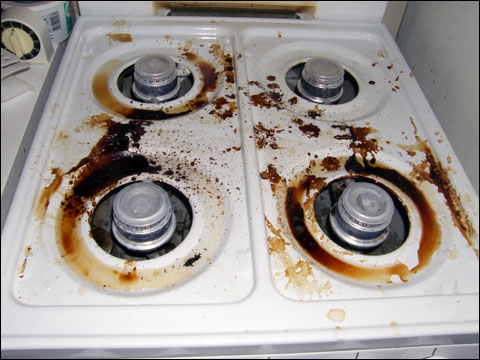 Yeah, that took awhile to clean up. Anyway, as for the name... School Rumble fans will get the joke. Or at least some of them might (I had to remind Lynnea). It may be one of the nerdiest beer names I've ever come up with, and you're talking to the man that invented Nut Brown Jenkins.