Listening to: nothing
Current mood: sleepy/wistful 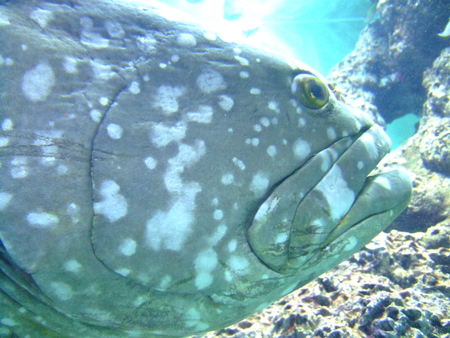 Ah, I can't believe today was our last day in Tokyo. It's a weird feeling, we've been here quite a while but it's been so nice the time has just flown by. I think I pretty seriously love this town, we haven't even left yet and we're already talking about the next time we come. This is going to have to be a short post though, as it's 1am here and we have to get up and fly home tomorrow.

Anyway, so today was our trip to the Tokyo Sea Life Park. Which isn't quite the massive and grandiose spectacle that the Monterey Bay Aquarium is, but was still a pretty impressive aquarium and only cost 700 yen to get in. They had a pretty good selection of fish from around world (the squid tank was a favorite of ours) and I got to pet a shark, which felt quite different that I expected (they look really soft, but they're actually quite rough and scratchy). They also have a pretty big penguin exhibit, and they are always fun to watch. Lynnea and I both love aquariums, so it was a good time all around.

Now, the Tokyo Sea Life Park is part of Kasai Rinkai park, which is this big park on Tokyo Bay. So after the aquarium, we decided to ride the big ferris wheel that's also in the park. It was kind of pricey, but we got a discount for having gone to the Sea Life Park, and really the views from it were stunning. I may have mentioned that my Japanese is poor, but I believe the lady on the speaker in the ferris wheel car said it was 117m tall. Which is pretty darn high up.

Once we got back from the park, we did a little bit of last minute shopping around Shinjuku, then hopped on the Chuo/Sobu line (specifically the Sobu line, if I'm not mistaken) over to Ryogoku to have dinner at Popeye Beer Club. Ok, so, yeah, it's pretty expensive, but Popeye Beer Club was awesome. They had an incredible selection of Japanese microbrews (I had a Yo-ho Tokyo Black Porter on cask, followed by Popeye original imperial brown ale called Divine Vamp III) and the food was ridiculously good. The highlight was the mini mutton steaks wrapped in bacon and smothered in roasted garlic paste. Dude.

After that it was a ride back to Shinjuku (with a crazy guy in our car - bonus!) and some packing. And now I really need to go to bed.


While I object to the mini-muttons, I do approve of your emphatic use of the word "dude".