Listening to: nothing
Current mood: tired 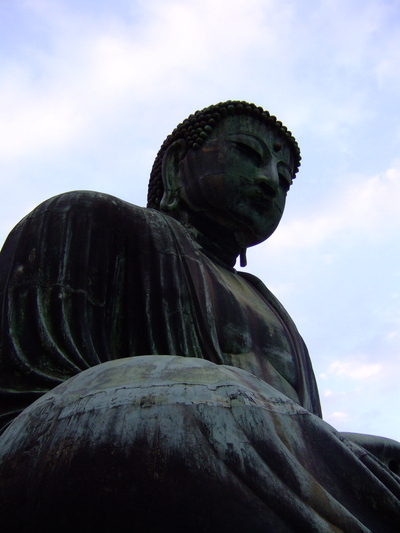 So, as last night's 2am post might have indicated, we got a slightly later start than intended today, although only by about an hour. We hopped the train to Kamakura and got there at probably about 11:30am. We sort of went the wrong way from the station to start because we wanted to see the beach. And man, Kamakura be ach is amazingly pretty (and we got attacked by hawks, which was interesting), although walking over and then back to main area added an extra mile or two of walking to the day.

After the beach we had a bite at this hot dog place along with a local Kamakura beer (Kamakura Flower) that was pretty decent. Then we walked over to one of the main big temples, whose name escapes me at the moment, but it was pretty impressive.

But the main attraction of Kamakura (other than the beach) for us was the Daibutsu. Which is this great big Buddha (13.4m) that was made sometime in the 14th century. Which proved to be another decent hike (we walked over 6 miles today, which actually has probably been a fairly normal amount for this trip) as well as 200 yen to get in, but it was pretty cool. And for another 20 yen you could go inside (he's hollow), which wasn't that exciting, but it was kind of fun.

By that time it was getting dark and freezing cold so we got back on the train and came back to Tokyo. After another long restaurant search we finally settled on a pizza place down the road to see if everything we had heard about Japanese pizza was true. And yeah, it is... Japanese pizza is kind of bland. Like it needs salt and garlic badly. But it was tasty enough and kept us from dying of hunger.

Since then we've just been sitting here watching japanese tv again, and since I only slept around six and a half hours last night I think it's time for bed. Tomorrow we're going to try the aquarium again, then finish up some last minute shopping.