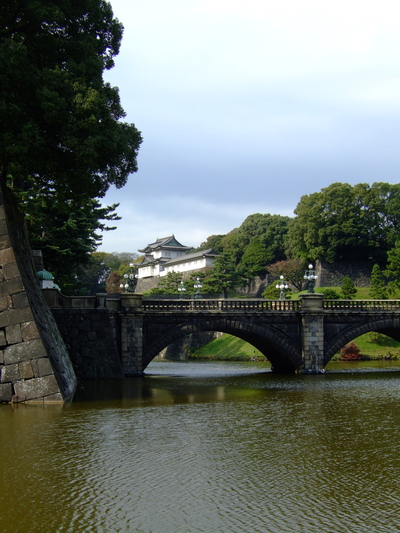 Well, the best laid plans of blah blah blah and all that. We had planned on going down to Kamakura today, but the weather forecast of heavy rain kind of put us off that for today. (Unfortunately, it's calling for rain there for the rest of the week, so I guess we're going to get rained on whenever we go down there, so we might as well buck up and do it.)

Instead we decided we'd over and check out the Imperial Palace. Because, you know, that's what you do. And, basically you can only walk around the outer part, but man, that was actually pretty cool. The Imperial grounds are really pretty. There was also a really cool, but sort of difficult to describe fountain that we watched for awhile. I hadn't actually been that interested in seeing it but I ended up finding it way cooler than I thought I would.

After that we thought we'd head over and check out Palm shopping street (the longest shopping street in Tokyo) which we thought was in Meguro, but alas, it was not in Meguro (it's actually on the Meguro line a few stops away, as we later discovered) so we ended up wasting the fare. We did have a decent coffee at Tully's (I've never really liked Tully's in the states, but it's not bad here...) since we were cold, and then a decent lunch of ten-don (not tendon, though that's also tasty) at the Meguro branch of Tenya.

After that we (ok, well, I) thought it would be fun to check out Nakano Broadway and the original Mandarake. Which was a crazy place. Nakano Broadway is another fairly long shopping street with Mandarake worming it's way though the upper floors as a series of unconnected shops. It was kind of fun to see another of the big otaku hangouts, but I didn't end up finding much, other than a Nyanko-sensei cell phone charm at pretty cool little shop in one of the back corners called Robot Robot. How can you not buy something from a place called Robot Robot?

Anyway, then we headed back to the hotel only to get rather heavily rained on on the way back from the station. This was not a problem so much as the fact that my shoes have developed holes in the soles from all the walking in the last week or so and my left foot got completely soaked. So after a bit of a rest and the judicious application of the hotel room hairdryer to my shoes, I wrapped a plastic shopping bag around each foot, put my shoe on and trimmed the bag back with scissors, and we set out in search of dinner. Yes, I am classy as a hobo. Did I ever mention the two week period in which I kept trying to patch my previous set of shoes using cardboard and tape? Well, it didn't work.

But the plastic bags did, and we made it over to Takashimaya Times Square and we up to the 13th floor to look for somewhere to eat. We had just about decided that everything there was too expensive when we were finally taken in by the lure of a garlic themed restaurant called Ninniku (garlic in Japanese). That place was awesome. We had some sort of Korean pancake thingy with a garlic dipping sauce, then Lynnea had a "spicy" (the Japanese seem to have a pretty low spice tolerance) pork and veggie and garlic thing, and I had a, um, meat (I thought it was pork, but it was also rather beefy, so I'm not sure) steak covered in garlic sauce and fried garlic and with cabbage and eggplant and rice on the side. Man, that was some good stuff.

After that we made our pretty much nightly stop at Family Mart and came back to the room. All in all, perhaps not the most exciting day, but pretty enjoyable. By the by, while I've been here, in addition to the cheap and delicious sake, I've also occasionally been drinking happoshu. What's happoshu, you may ask. I don't know. Well, I do sort of know. See, in Japan, beer is taxed based on the amount of malt it contains, so over the years the beer makers have made a cheaper beer-alternative to beat the taxes, and over the years the Japanese government has decreased the amount of malt that gets taxed until nowadays it's generally made out of less than 20% malt. Which means that I have no idea what it's made of, but it's (and this could possible get me kicked out of Quaff) actually pretty good. It's beer flavored something or other, and the flavor is pretty good. Anyway, just thought I'd mention that. If you're even in Japan, the happoshu is a pretty reasonable beverage (especially the Kirin Tanrei and the Sapporo Barley and Hops).

Ok, that's it for today. Tomorrow we're once again going to try to get slightly out of town with a bit of hiking (because my feet, they love the hiking) on Mt. Takao. Should be fun.