[Previous entry: "Red Letter Day"] [Next entry: "The Terror in the Park"]

Listening to: nothing
Current mood: jovial

Ah, another weekend has bitten the proverbial dust. It's been a good one though. The most salient event of the weekend was a visit from none other than my friend Nate from Fremont. It was loads of fun having him up and we gave him the southern Oregon tour: took him to a couple of the tastier Ashland eateries, went up to Crater Lake, the Rogue Gorge, Natural Bridge, and Mill Creek falls. Outdoorsy stuff mostly. It was only too bad that he couldn't stay more than a day. Plus all that hiking around practically killed us yesterday. But it gave me a good excuse to loaf around and finish that Lovecraft book today.

Speaking of which, I was noticing early on in reading it just how sickeningly much a good deal of my fiction prose is copying Lovecraft's descriptive style. Not his style in the describing the creepy, but rather what he does when he's giving those soft etherial, dream-like outdoor descriptions. Like say at the opening of "The Tomb" or (where I noticed it) near the beginning of the "The Colour Out of Space". I'm sort hoping that now that I've noticed it I can cut it out except when I want to invoke that mood, because thus far it seems like I have trouble not writing etherial stuff. But on a side note, those who watch the sidebar for my reading choices: I haven't picked my next book yet so it'll still be up there until tomorrow or the next day.

On another note, for my birthday a couple weeks back my parents ordered me a shiny new Wacom tablet (the 6x8 Intuos3 for those that are interested). UPS however, appearently decided to take their time in getting it up here, so I didn't actually get the thing until Friday. So I've been playing around with it off and on over the weekend. And tonight as I was messing around with it, I happened to notice a $10 bill lying on my desk and it gave me an idea... If I could just trace it well enough, why... any financial problems I might ever have would be solved. So I laid the bill down on the tablet and just 30 seconds later... 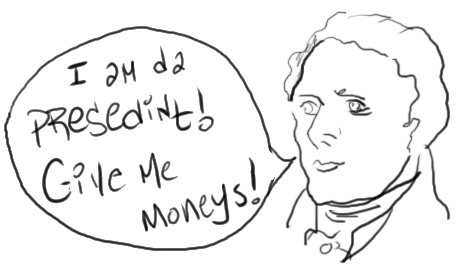 Yes sir, I expect the moneys to come rolling in any second now. Just don't tell the gover-mint though, they might get mad.