Things that are merry

Listening to: nothing
Current mood: jolly? 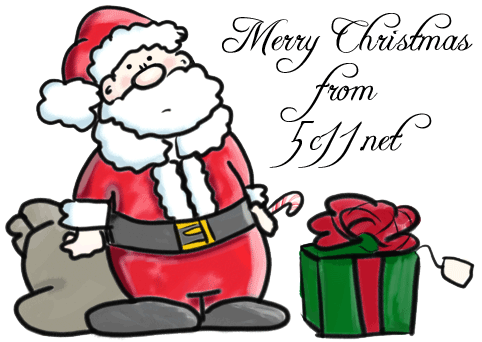 Ok, so the site's fixed. In case you're wondering what was wrong, it was the usual thing where if I change anything at all in the slightest, the sidebar ends up sitting inside the text section. And you know, some people would be all like "I doesn't understand teh htmlz!" but man, I do this stuff for a living and when it breaks like that it's incredibly frustrating. The problem is that I have to work with an abstracted html interface through the blogging software... I probably should have written my own, but when I started this site I wasn't really good at that kind of thing. Now I'm fairly confident I could do it pretty easily, but meh.

And speaking of the blogging software, what caused the annoying break was trying to upgrade said software in hopes of combating the vileness of the comment spam that's been hitting the site pretty bad lately. I had high hopes for the new version, but the only thing I can tell that it does better in that regard is allow me to delete multiple comments at once (the old version only let you do one at a time if you can believe that). But while I was mucking around in the code trying to fix the sidebar, I noticed the section where the action for the comments form is, so assuming that php is installed on my host (which I'd pretty surprised if it wasn't) I may take a little time and tap out some kind of filter to try to keep spam levels down. I suppose I could also do a captcha for that matter (I've always thought they'd be fun to write for some reason), but more likely I'll just filter out any post that attempts to put in any kind of link. Cause you people don't put links the comments anyway. Um, mostly because you people don't post comments. Which is partly because, to a large extent, you don't exist.

So anyway, other than breaking my highly neglected website it's been an ok time around here. Went to both the office Christmas party (dull) and the Quaff (I'm a member now) Christmas party (awesome) last weekend, which was rather exhausting (introvert, you know) but still enjoyable on the whole. Heh, and at the Quaff party I won a huge (well, 1'x1'x1.5') Bitburger lamp in the raffle... like the kind that goes on the end of a lamppost. And while I have no idea of yet what to do with it in this tiny apartment, it fills me with mirth whenever I see it. I wish I could take a picture of it to post on here, but I'm as of yet still without a digital camera. Ah well, someday.

Speaking of Christmas I'm sort of ready for the holidays to start, because if they don't get here soon I'm worried that I'm gonna be sick of the whole concept before they get here. And I've actually been fairly looking forward to this year too for some reason. In fact I've been making Lynnea watch all the old classic Christmas specials (Rudolph, Frosty - which does not hold up well by the way, The Grinch, Charlie Brown, that sort of thing) because she's never seen them, so that's been fun as well as jollifying (oddly Firefox spell check does not think that's a word). Other than that it's been work and vaguely yearning for a Wii, but not enough to camp out all night for one.

Anyway, I'm actually going to have to start paying for hosting soon, so hopefully there'll be more from me before too long.

Listening to: nothing
Current mood: eh

The site is slightly broken. It'll be fixed later tonight. Sorry bout that.