It turns out there's nothing like 10 hours of sleep and several cups of coffee to really help put a bad weekend behind you. Why was the weekend bad, you ask? Well, I could write about it for pages, (in fact I'd already started to but it didn't seem worth it to complain that much) but I'd rather not remember it in that much detail. I'll just sum up. Basically we went down to visit my sister Sarah in Sacremento this weekend and spent the majority of the time being heavily sleep-deprived and either bored to tears or seriously annoyed. And I hardly even got to talk with my sister at all the entire time. The whole thing was a wash. Although I guess on the plus side I got to play with Sarah's cats and I picked up another DJ Krush record (Krush, which is all jazzy). I think the problem is that when my family goes anywhere they always seem to want to "do something", whereas Lynnea and I are happy to just wander around a bit, hang out in coffee shops, chat, etc. But already I'm remembering the trip more than I want to so I think I'll just drop it with this minor dash of mathematics: Apple Hill == (Bainbridge Island * 1000).

Anyway, so tonight I'm way more full of energy than normal. I'm not sure if it's the caffine, the sleep saturation, or just the autumnal quality of the air outside but I'm feeling, I don't know, like full of creativity or something. I might even write a few songs for the hypothetical pirate band or work on my current short story/novella tonight, who knows. Hmm, but then again for all my energy I actually I don't think I have anything else to blog about at the moment.

Oh but, lest I forget: Happy Birthday Tim!

Wow, so that was almost a month then? Huh. Alright well, here's for the obligatory apology/excuse portion of the post. The main thing about the last month was that I was working. A lot. And by a lot I mean a-bloody-lot. I don't really know when I've ever been as stressed about work. Lucikly Labor Day weekend came along and Lynnea and I went on a short little anniversary trip over to the coast, which did a really good job of destressing me. And then sometime last week work completely dried up, so I'm back to normal now.

For our trip, we went to Coos Bay, in which very little exists worth going to aside from a surprisingly good German bistro (actually there are supposed to be some other good places there but we just ate at the bistro). Really the whole of the Oregon coast is a portrait of desolation, but that area exemplifies it more than other places. For example, just up the road from Coos Bay is a town called North Bend... if you ever wanted to live somewhere post-apocalypic, move to North Bend. It's actually so desolate that it's kinda cool. It looks like a ghost town even though there are actually people who live there. I guess you could say it's a real horror movie backdrop of a town. And as a bonus there's a really cool used/rare bookshop that we only got to spend about 5 minutes in. But I digress.

Anyway, our trip to the coast was hardly the only thing that happened since I last posted. We went to Lassen park with my parents back in August, and attended the wedding of Nick and his childe bride on the way back from the coast, and probably did a whole lot of other stuff happened that I don't remember. But what's the point of living in the past? Plus I don't want to be bothered with writing about it.

Speaking of not being bothered to write I think that's about it for this post, but I do have another Alpha Flight (which finally got so bad I couldn't keep reading) snippet I've been saving for a little while now: 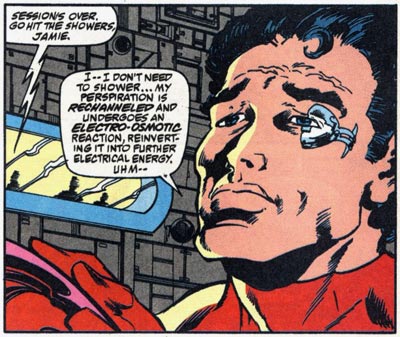 Yeah Guardian, I think we've all tried that excuse to get out of showering after gym class...