Listening to: nothing
Current mood: huh?

No no, no amusing out-of-context Dr. Strange panels tonight. (Though if there are any who doubt my true devotion to the Doc, let me point out that I read forty issues in one sitting last night... which is possibly one of the better ways to non-chemically induce delirium known to man). No, tonight I've got me some ranting to do. But before I get to that let me balance it with just a little raving. I don't really talk about anime much on this site, but let me just say that Paranoia Agent (Mousou Dairinin for you more hardcore otaku) is quite possibly the best anime I've seen since my all time favorite, Serial Experiments Lain. Admittedly I've only watched about the first half so far, but so far there's absolutely nothing not to like. I can't really even explain the show, other than to say that it features a young boy on golden rollerblades whacking people with severe emotional problems in the head with his golden bat. That should be enough to intrigue the people who would enjoy it. But on to ranting time. If anybody reading this hasn't finished Half-Life 2 yet but intends to do so at some point and doesn't want to hear even vague complaints about the ending, I suggest you stop now. Those who don't care or don't know what I'm talking about read on.

So in case you haven't guessed, I finished Half-Life 2 tonight (again, for those who don't know what I'm talking about it's a computer game about a guy named Gordon, who is a presumably Canadian (where else would he get the name Gordon?) research physicist who hits things with a crowbar). About 15 minutes ago actually. And honestly, all I can say is... the hell? What kind of ending was that? It's like, stuff was happening and then stuff... stopped happening. This is not how we write a story. What, did the dog eat the last few pages of the script? I mean, we must be talking serious writer's block here. I can just picture it... "Um, alright alright, so then you lob some glowing beach balls at this hoser, um, and then, and then, yeah! the guy goes 'Noooo!' and then the big thing explodes and you don't know how they're gonna get out of it and then um um um um um... gak! [At this point the writer suffered a fatal heart attack and died]". When time freezes I expect at least some kind of cool deus ex machina, not just some 60s film effects and enigmatic muttering.

I guess I shouldn't complain, it was pretty great game after all, and it's not like I was upset at the enigmatic beginning. Of course that's partly cause I thought it would get explained through the course of the game. Oh well, few things in life are more fun than building jumps for the buggy out out of junk on the coast road. Of course maybe that's just because every time I go for a jump I say, "Now them Duke boys had gotten themselves into a whole heap'a trouble with them antlions..."

Listening to: The Get Up Kids - Something to Write Home About
Current mood: partially inebriated

Disclaimer: I really do love Dr. Strange, it's just that it's got so much to take out of context...

Alright, I'll admit right off that it's wrong of me to post this. But as the mood section reads I've had a few and I couldn't stop laughing at this panel for like five minutes. As Dorian of PostModernBarney might say, "Subtext? What subtext?" 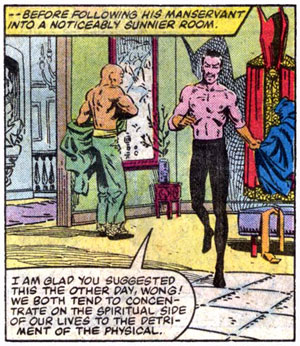 Heh, but no, seriously, they're just doing kung fu or something. I swear.

Kung Fu... is that what the kids are calling it nowadays?