Well I certainly wasn't planning on posting tonight, but once again I'm reading Dr. Strange and have come across a fairly amusing couple of panels that I really can't resist sharing. (For those that are wondering I was off reading Hellblazer and the Books of Magic for quite awhile there and didn't get back to Dr. Strange till tonight.) To wit: 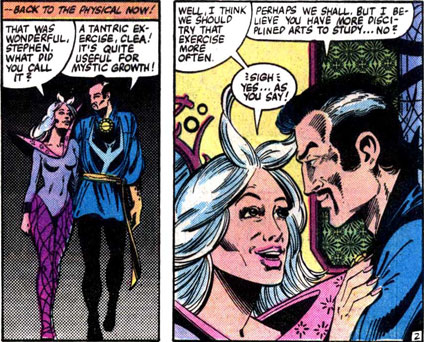 Useful for mystic growth, eh? "Mystic growth"... is that what the kids are calling it nowadays? I like the look on Clea's face in the second panel... she looks like she just stumbled out of a frat party. And Doc's just got this, "oh yeah... we'll do that again, baby" look. Now, actually, prior to this panel Clea and the Doc were travelling through the astral plane with the minds linked. "Travelling though the astral plane with their minds linked"... is that what the kids are calling it nowdays?

Heh, you gotta confess, the Doc is one sexy sexy man. Anyway, I gotta get back to my comic.

Like sad bits of tinsel and the dry, dessicated, needleless remains of your once beloved Christmas tree, it is well past time that posted and got that Santa off the top of my page. So don't you just hate it when your favorite blog (or possibly one of the fourth or fifth tier blogs that you only read when you're bored out of your mind) posts something really lame, then doesn't post again for almost a month. Yeah, me too. But this isn't the only place that's been eerily quiet lately. I think there's something about January that saps the soul. January is the year's equivalent of a Monday morning after a weekend that went by way too fast. It's holiday holiday holiday then suddenly you're left wandering around in cold, bright January, tired, bleary and slightly hung-over. Adding in the fact that I've been working way more than usual lately, it feels like all the coffee in world couldn't wake me up these last couple weeks.

I wish I could say that alot has happened since my last post, but really not much has. I mean there was Christmas, and New Year's and then the stumbling days of early January to contend with, but none of those was partictularly noteworthy. The only events that stick out in my mind are seeing The Life Aquatic (which if it's not obvious, is great) and that my old friend and partner-in-crime the infamous Nick Scone came down for a visit last weekend. Well, actually he came down for a funeral, but he stayed with us and it a pretty good time. The one thing that I learned from last weekend is that although a Salty Dog might sound a little weird, they're actually delicious. The other thing I learned is that if you drink too many of them at the Sheep on a saturday night, you will be hung over for church the next morning. Which is funny in concept, but less so in application.

In other news, we've been eating a massive amount curry lately due entirely to this old school (as in, written in 1954) Indian cookbook called Indian Cookery by Savitri Chowdhary. Everything we've made from it has been ridiculously good. But then, my edition has a foreward by Jennifer Patterson so how could it not be a good book?

Alright, well I think that about wraps things up for this post. I mean sure, I could blather on uselessly for pages upon pages more, but I think I'll wait until I actually have something interesting to say, as opposed to just this collection of random thoughts and praises for cookbooks. At least that damned jolly Santa will be off the top of page.