[Previous entry: "I can't see without my glasses!"] [Next entry: ""Where we will all spend the rest of our lives""]

Listening to: nothing
Current mood: aghast, I tell you

Ok, so I like to do the occasional slighty-out-of-context comic panel joke. It gives me something to blog about when it's been, oh almost a month or so. But this one from Saga of the Swamp Thing #3... this one... nothing out of context here. I really almost didn't post it. I mean, it's just... Words escape me, so pictures will have to suffice: 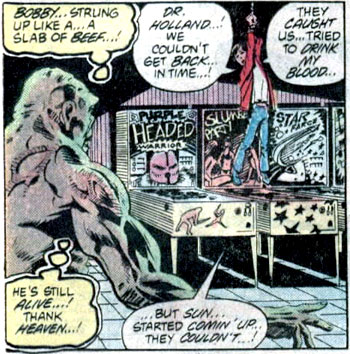 I'm not going to point out what's bad in that panel. If you don't notice it right off, it's for the best. This is not to say it's not hilarious, but still. So very not right. I mean, come on, kids read this stuff.

Anyway, like I said that gives me an excuse to blog tonight, which Lynnea will happy about since she's been pestering (er, I mean encouraging) me about it lately. I think I actually forgot that I had a blog for a few weeks there, such is the whirlwind of my life. Alright, so it's more of a whirlwind of working and rarely leaving the house for more than half an hour at a time, which you'd think would give me tons of time to blog but then, what about, right?

Although... I was actually going to blog the other night about a trip to the local mall the frightening replacement of our culture with simulacrum, maybe complain about our society poisoning itself through its ridiculously Manichean worldview, but I think I got distracted by Castlevania: Symphony of the Night for the PSX. I might be about 8 years behind when it comes to consoles, but that game pwnz0rz, if you know what I'm sayin. Really, gaming just doesn't get much better than that.

Anyway, I gots more Swamp Thing to read. But yeah, for those wondering I'm still alive. I didn't like, die or anything.