Listening to: nothing
Current mood: not bad

So, I know I've gotta just stop doing these out-of-context comic book panels. I mean, yeah they're nothing but a cheap laugh. I know that. But sometimes I'm just reading something and along comes a panel like this: 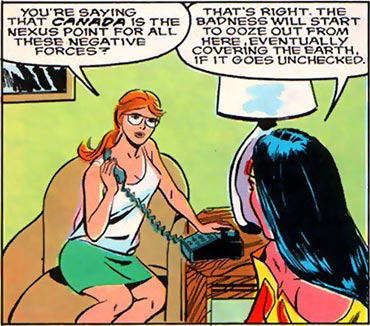 Now that's just cold. I mean, come on. Canada's not so bad. And this is their very own super team even. Heh, of course they're talking about something else but I see that kinda thing and it makes me laugh. (Plus Lynnea keeps telling me that I don't post enough, which is odd considering she didn't even read my blog for like, 6 months or something there.)

But anyway, for some odd reason (masochism?) I've been reading through old Alpha Flight comics lately. For those that don't know, the 'Flight (I can't believe I just typed that...) is Canada's very own number one super-team. The original lineup was a guy in a superpowered maple leaf suit who couldn't decide on a good super-name (Weapon Alpha/Vindicator/Guardian), another guy who could turn into a sasquatch (Sasquatch), two mutant twins with speed and light powers (Aurora who is both neurotic and schitzophrenic and her gay brother Northstar who is both a former ski champion/radical seperatist and an asshole), a rather annoying Canadian nature goddess (Snowbird), a rather likeable doctor-turned-shaman (Shaman), and a dwarf - not the mythical kind, the normal kind (Puck).

Wow I sure do miss the original team (who are, as of issue 71: dead, dead/a robot/dead/a tiny little man/a robot again/a woman/and back to normal, elf, elf (don't ask), dead, a jerk/back to normal, an aged non-dwarf/and presumably dead). Yep, it's a comic book that started with the premise above and yet still found somewhere downhill to go. It's really an amazing study in bad comic-bookery.

Um, no. I don't have better things to be doing. Shut up. Maybe you have better things to be doing than judging me! Back off, you hear me! Heh, anyway I gotta go see if they survive this encounter with some guy who looks like a vampire with a 90s skater haircut (you know, shaved sides long on top. pretty much the only other haircut despicable enough to be in a league with the mullet?).