Hmm. Who could it be corrupting our nation's youth though evil evil comic books? Who would write such horrible loathsome things...? Hmm... let's see, could it be, hmm, I don't know... 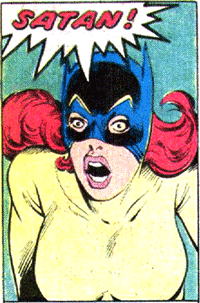 On a side note, mightn't a daughter of Satan have a cooler name than Patsy? I mean, I work with a really nice lady named Patsy but the name is not daughter-of-satan material. She should have a name like "Hell-vira" or "Devilisa" or "Legioness" or "Karen". Really almost anything is better than Patsy. But at least by pure coincidence she became The Hellcat.

(Of course I haven't finished the comic yet, she might not actually end up being a daughter of Satan...)

*edit* - Apperently she's only his daughter in the metaphysical sense... or something. It was eh, a little fuzzy on the details.